“Is it possible that YouTube has determined that the IDEAS expressed in my speech are inappropriate for people under 18 – The precise audience that most needs to hear this message?” 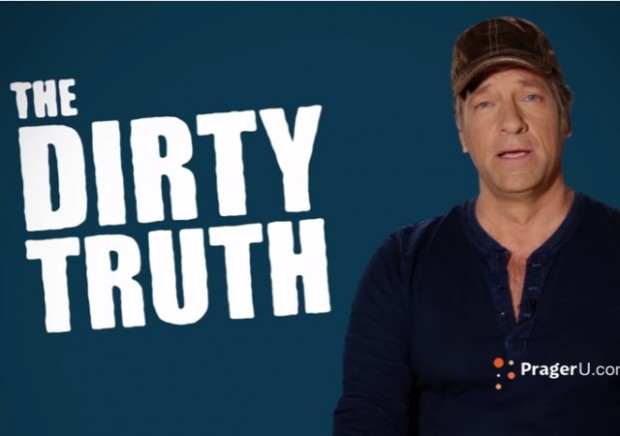 We’re no stranger to YouTube suspensions here, having been arbitrarily subjected to one ourselves.

So why was the video only now suspended? Rowe alerted his Facebook followers of the video’s suspension in a post yesterday saying, “Obviously, I was surprised to learn that my video could be interpreted as anything but the G-rated message I believe it to be.”

Rowe concluded, “Is it possible that YouTube has determined that the IDEAS expressed in my speech are inappropriate for people under 18 – The precise audience that most needs to hear this message? The answer appears to be yes.”

Last June, I was invited by Denis Prager to give the commencement speech at his virtual university. I accepted. The speech exists today in the form of a 5-minute video that’s been viewed nearly 6 million times on YouTube. I’ve just learned however, that YouTube has determined the content of that video to be “inappropriate.”

The basic message of my speech is simple – millions of good jobs currently exist that do not require a four-year degree. In the video, I touch on a few of the reasons why these jobs are routinely ignored, but focus mostly on the fact that society doesn’t encourage people to pursue vocations that don’t require a diploma. Hence, most people are not passionate about a long list of viable opportunities, because most people are affirmatively discouraged from learning a trade. Thus, our ever-widening skills gap.

I approach the problem by challenging the old platitude, “Follow Your Passion!”

1) Passion is a critical component of job satisfaction and overall happiness. However…
2) Just because you’re passionate about something, doesn’t mean you won’t suck at it. Which means…
3) Following your passion doesn’t always lead to lasting happiness or true job satisfaction. Ergo, my advice to graduates is…
4) “NEVER follow your passion, but ALWAYS bring it with you.”

According to YouTube, “restricted videos” are videos that contain any of the following:
• Vulgar language
• Violence and disturbing imagery
• Nudity and sexually suggestive content
• Portrayal of harmful or dangerous activities

Obviously, I was surprised to learn that my video could be interpreted as anything but the G-rated message I believe it to be. So I watched it again – this time with an open mind and a more discriminating eye. I saw nothing violent, harmful, or dangerous. Nothing vulgar, disturbing, or objectionable. True, the animated figures are unclothed, but clearly androgynous, as well as faceless. I was honestly at a loss. But then I saw this, buried in the fine print.

“Some videos don’t violate our policies, but may not be appropriate for all audiences. In these cases, our review team may place an age restriction when we’re notified of the content.”

Is it possible that YouTube has determined that the IDEAS expressed in my speech are inappropriate for people under 18 – The precise audience that most needs to hear this message? The answer appears to be yes. So, before I officially complain to YouTube, I thought perhaps I might ask 5 million of my closest friends if my head is up my astericks.

PS. There are currently 6.2 million available jobs in this country, the majority of which do NOT require a four-year degree. Student debt is now approaching $1.3 trillion, and millions of college graduates have failed to find work in their chosen fields. And yet, we continue to push a college degree like it’s the best path for the most people. We continue to tell our kids to follow their passion, no matter where it might lead them. Enough already. The time has come to encourage our kids to explore ALL of the educational options available to them, and ALL of the vocations waiting to be filled. That message has been restricted for too long.

The video has since been restored (at least as far as we can tell) and as we’ve discussed at length, YouTube is a private entity and can control content as they see fit, but when the ban hammer gets thrown at a message that essentially says “do what pays and leave the underwater feminist basket-weaving to someone not serious about earning a living” we are again, observing YouTube’s erratic suspension behavior with cocked brows.