The Liberty University Convocation crowd was drawn to its feet in the Vines Center Monday as singer/songwriter Jonathan Cain led students in a medley of his favorite hits, which he co-wrote as a member of the rock band Journey. He showcased his swelling piano rhythms with “Faithfully,” “Open Arms,” and “Separate Ways,” and then ended the set with a soulful singalong of “Don’t Stop Believin’,” one of the most downloaded songs of all time.

Cain also performed “Deeper Than Deep,” off of his 2016 solo album “What God Wants to Hear,” a personal project about his faith, before playing “More Like Jesus,” a song that has not yet been released.

He is a longtime member of Journey, playing keyboards and rhythm guitar. His résumé includes 19 Top 40 singles and 25 gold and platinum albums. Cain will be inducted into the Rock and Roll Hall of Fame this year, along with his bandmates. 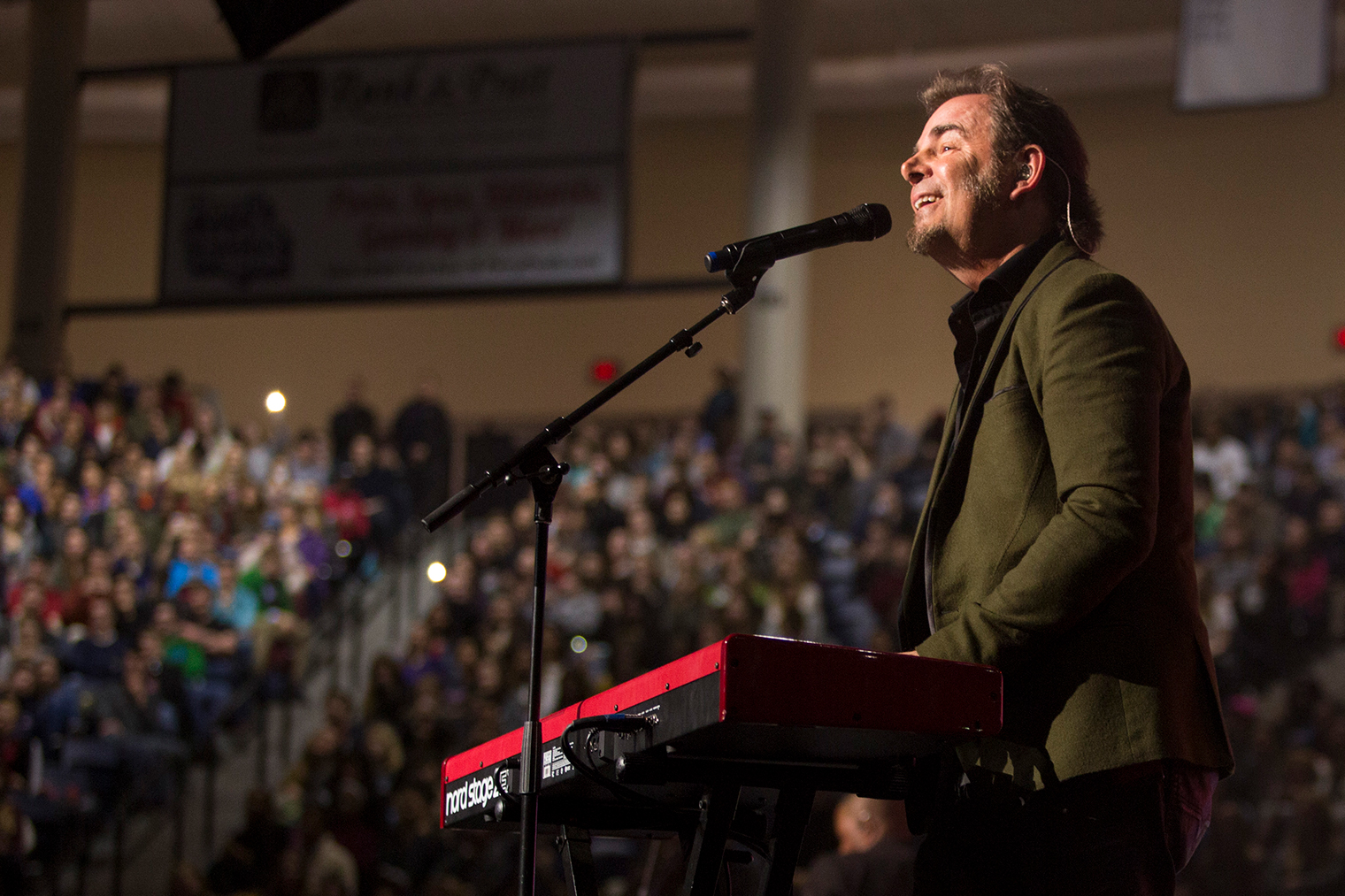 Before striking the keys on Monday, Cain shared a little of his life story with the crowd, taking questions in a chat, moderated by David Nasser, Liberty’s senior vice president for Spiritual Development.

Cain credited two figures for his success in life: his Heavenly Father and earthly father. It was the latter who introduced him to the former, he explained, teaching him to pray and leading him to know Christ at an early age. Cain’s faith shows in the ways he gives back to others, including through the Make-A-Wish Foundation.

“Blessings are meant to be paid forward,” Cain said, “(for example) when God gives you something as mighty as an opportunity to be in a band (like) Journey. I was selling stereos two years before that … and then all of a sudden I am supernaturally taken to a rock stage where I am playing in front of all these people. That was a blessing … and I knew it had to come from the Lord.”

But with the fame came critics, Cain said, and he advised the students to pursue their callings without worrying about the naysayers who will try to discourage them along the way. Rather, he told them to focus on what they are after and to carve out a path in pursuit.

“Stay on your course. God puts you on a course. I know that the Lord sent me on a path to write songs to make people smile, to make people feel good,” he said. “I did it not for the adoration or the acceptance; I write songs, and if you don’t like it, that’s too bad; that’s my song. And I encourage all of you to boldly enter in, to not pay attention to all that noise. You have got to turn down the noise and stay on the course. … Begin with the end in mind.”

Cain’s wife, televangelist Paula White, also spoke during Convocation. She was introduced by President Jerry Falwell, who noted White’s role in advising President Donald Trump on matters of faith. White delivered the invocation at the Presidential Inauguration, attended by Falwell and his family. (Falwell read Scripture during a private church service with the first families prior to the Inauguration).

White took a moment to express her appreciation for Liberty University.

“It is an honor to stand with you,” she said, adding that President Trump has a “deep respect and admiration” for the Falwell family and for “the magnitude of leadership under (Jerry Falwell’s) vision and heart (that) he carries out for you as students at Liberty University.”

Falwell expressed how impressed he was with Liberty’s gospel choir, LU Praise, which performed Saturday morning in the Washington National Cathedral at the Inauguration National Prayer Service. The group opened Convocation on Monday with a time of worship.

“When Liberty was founded in 1971, we had some really tough years, and our theme song was ‘We’ve Come This Far By Faith,’” Falwell said. “They sang that for the president and the whole nation.”

Falwell’s wife, Becki, shared how that moment on Saturday brought her husband to tears.

“(During the 1970s and ’80s), they sang it over and over again (at Liberty),” she said, “(declaring) they were going to keep fighting, and they trusted in God, and look what happened.”

Today, Liberty is the world’s largest Christian university and is in the midst of a nearly $1 billion rebuilding of campus.

“Any time you are having a hard time or struggling, just pray to God and remember to have faith,” Becki Falwell told the students. “You never know what might happen.”

Read more at Jonathan Cain of the band Journey shares his music and personal faith.