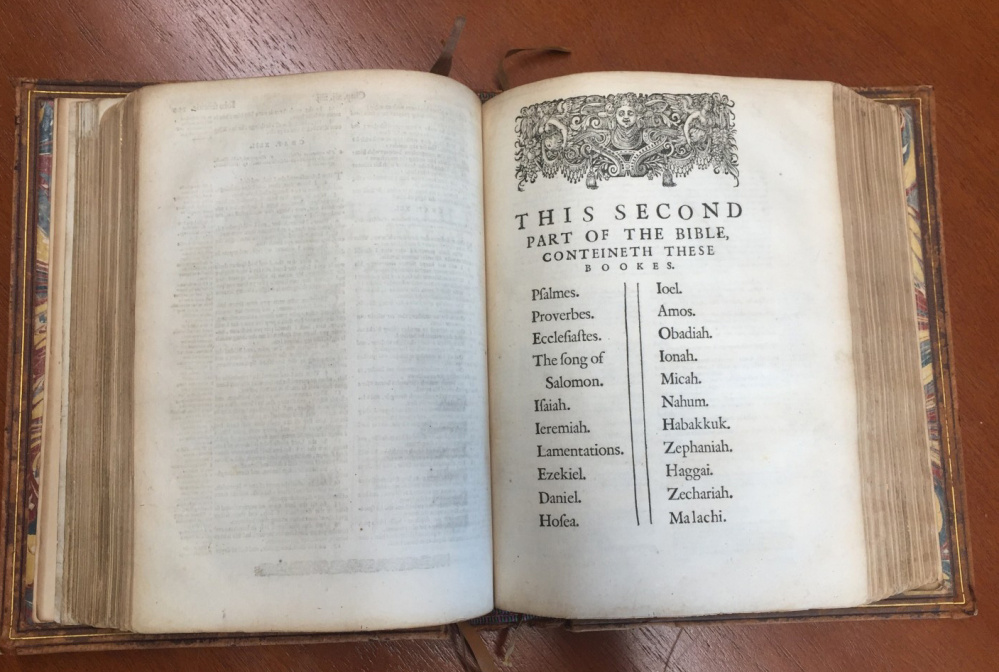 A find like this Geneva Bible is significant not necessarily because of the book’s age, but because of the larger story it can tell, said Zachariah Selley, associate head of special collections and college archives at Lewis & Clark.

In other words, there’s more to take away from this Bible than just what it contains, Selley said.

“The 1599 Geneva version of the Bible is a perfect example of that, because it’s one of the best annotated, indexed and referenced versions of the Bible that had been printed and was available to the general public at the time, so it was very revolutionary in that way,” Selley said.

Gordon Campbell – a historian for the Museum of the Bible, which is expected to open in 2017 – said the Geneva Bible was widely read in England; he called it “really kind of a study Bible, to be read by individuals.”

The Geneva Bible was “the first really competent translation of the Old Testament,” according to Campbell. And it had extensive notes, to help readers understand.

The Geneva Bible, the Library of Congress says, “was used by the Pilgrims and Puritans in New England until it was gradually replaced by the King James Bible of 1611.

Hannah Crummé, the library’s head of special collections and college archivist, told the Oregonian that the Geneva Bible found at Lewis & Clark was in fairly good condition, with just a few ripped pages.

Here’s a little more on this particular book’s history, according to the newspaper:

“Crummé has traced the Bible’s ownership back to Francis Fry, a 19th-century Bible collector in England. From Fry, the Bible apparently went to a London bookseller, who sold it to the Rev. Clarence Baerveldt, a pastor in Waldport and Yachats, who gave it to Lewis & Clark. Along the way, it’s possible the Bible made a stop in the southern Oregon community of Roseburg – Crummé said she found a Roseburg address written on a page.

“Crummé thinks the Bible was put in storage in 1967, the year Lewis & Clark dropped its century-old affiliation with the Presbyterian Church and the year Watzek Library was built, providing a convenient basement.”

Read more at After 400 years, Geneva Bible has lessons to teach.