A group of 250 clergy and ministry leaders prayed, sang and embraced each other Thursday evening during the two-hour National Day of Prayer observance, held in Statuary Hall at the U.S. Capitol.

The annual event has a storied history. In 1952, Congress first passed a resolution “to set aside and proclaim a suitable day… on which people may turn to God in prayer and meditation.”

Dr. Ronnie Floyd, outgoing president of the National Day of Prayer Task Force, hosted the prayer gathering. “Government cannot fix us,” he said. “Politics cannot heal us. But loving one another can change the world.”

He introduced Rev. Anthony Thompson, a member of Emanuel AME Church in Charleston, South Carolina. In 2015, a gunman shot and killed Thompson’s wife at the historic black church.

“Can you pray for those who mistreat you?” asked Thompson. “Can you love someone who hates you because of the color of your skin? God asked me that question one difficult day.”

“Can you love someone who hates you because of the color of your skin? God asked me that question one difficult day.”

Thompson shared the shocking story briefly. His upcoming book Called to Forgive chronicles the tragedy in detail, along with how his family has recovered since then.

He was followed by Andrew and Norine Brunson, missionaries to Turkey who were freed in October. They spoke of how prayer cultivates fortitude in the midst of persecution, which they foresee coming to Western nations.

“The first commandment is to love God,” said Brunson in an interview. “Intimacy with God is the foundation. It will soon become more difficult for people to stand for Jesus Christ in an unapologetic way.”

Inspirational songs and messages throughout the evening called participants to live out love, even in the face of harassment and helplessness.

“God asked me, Can you love Dylann? Can you love that man who killed your wife?” Thompson recounted his prayer. “Forty-eight hours after that horrific tragedy, I was at Dylann Roof’s bond hearing — and I had to answer God’s question.”

The call to forgive haunted him, Thompson said. Approaching the podium at the hearing, he was reminded of his own sins and failings.

He continued, “I said to Dylann Roof: ‘I forgive you. My family forgives you. But we would like you to take this opportunity to repent. Repent, confess and give your life to the one who matters the most — that’s Christ. Then he can change your ways.’”

In 2017, Roof was convicted of murder in state and federal trials, given nine consecutive life sentences.

“After I forgave Dylann, I experienced God’s love,” said Thompson. “God’s peace is real. It was in my heart, in my soul, in my body. He freed me [of] the burdens of bitterness, rage, anger and malice.”

Thompson is featured in the documentary film Emanuel, set to release this summer. It reveals the Charleston community’s journey of healing after the church shooting.

The gathering reflected ethnic diversity on the platform. Black, Latino, Asian and Native American clergy offered their intercession for the nation.

However, the scripted format allowed leaders little space to address current events and concerns. Speaking in interviews afterward, prayer leaders offered perspective on contentious issues in the church and nation.

Recent remarks by President Trump have reignited discussion of how to consider the legacy of Robert E. Lee. “Those who want to call Lee a hero, they can,” said Rev. Thompson. “However, he was fighting against me and my ancestors. He’s not a hero in my eyes.”

Virginia currently has several war memorials to the Confederate general prominently displayed in public areas. A state judge ruled Tuesday on the status of two memorials in Charlottesville, Va.

“During the Civil War, he was not doing the right things or for the right reasons,” added Thompson. “He was not where God wanted him directly to be. Maybe he did later on, I don’t know his heart.”

In his current best-seller The Color of Compromise, theologian and historian Jemar Tisby contends that learning accurate history is a necessary first step to reconciliation.

Prayer leaders Will Ford and Matt Lockett, who was in attendance, echo similar themes in their recent book. 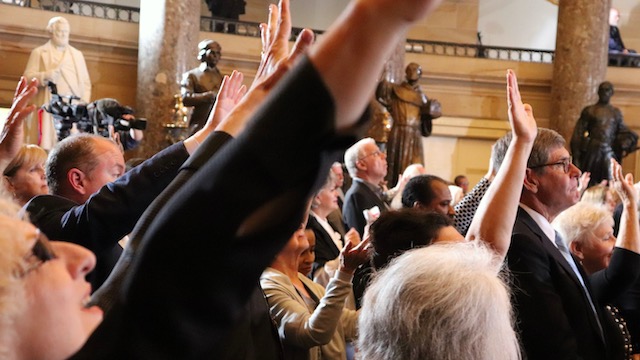 On May 2, 2019, a group of 250 clergy and ministry leaders worshipped during the National Day of Prayer observance in Statuary Hall at the U.S. Capitol in Washington, D.C. (Photo: Josh Shepherd)

Does “Love One Another” Include Immigrants?

“When we embrace the love of God, we are driven, compelled, required and commanded to love one another,” he declared in a preacher’s cadence. “When we have this love, the donkey and the elephant cannot divide us.”

Rodriguez has been part of the White House Faith Leaders Initiative since its inception. He has often cast immigration reform in terms of human dignity and the rule of law.

“Love should drive us to protect and secure our borders — and for people to pay punitive damages for coming here illegally,” said Rodriguez.

“It should also motivate the church to advocate members of Congress to expeditiously pass comprehensive immigration reform.”

Several recent immigration reform bills in Congress have failed. The White House has continued to reduce annual quotas for legal immigration, a move decried by many Christian groups that minister to refugees.

Rodriguez, who pastors a multi-ethnic church in northern California, notes a reform plan has been drafted. He declined to provide specifics.

“I really believe this president can surprise all of us on immigration reform.”

“When we had dinner on one occasion, I gave a proposal to President Trump,” he said. “I know for a fact that Jared Kushner has our proposal in his hands. I really believe this president can surprise all of us on immigration reform.”

He points to partisanship as a barrier in today’s divided Congress. “The question is whether or not Democrats will give him a win,” added Rodriguez. “That would require supernatural love on steroids.

“Love would find a solution reflective of our Judeo-Christian value system.”

Solidarity, Diversity and the Next Generation

This year, Holocaust Remembrance Day fell on the same day as the National Day of Prayer.

Yael Eckstein, president of the International Fellowship of Christians and Jews, found this consequential.

“Only God in his providence could have organized history that these two sacred days would fall at this moment,” she stated via e-mail.

“Religious communities are under violent attack around the world, and the memory of the Holocaust is under threat by a new generation who doesn’t seem to know what happened, or care.

“It brings us together in mutual solidarity, and it gives me hope that God is the one paying attention to the future.”

Leaders closely linked to the National Day of Prayer (NDP) shared why public prayer is significant.

Jeff Eckart serves on the National Prayer Committee, the parent ministry of NDP.

“Moments really matter,” said Eckart in an interview. “This event is a focal point for millions of us as believers to focus our prayers on the nation today.”

Eckart, who leads student ministry Never the Same based in Grand Rapids, Michigan, said he and other leaders also recognize the annual event’s shortcomings.

“It is the desire and dream of [NDP] leadership to make it truly multi-generational and multi-cultural,” said Eckart.

“Really, this is the most important issue facing the National Day of Prayer movement. We are making some significant steps towards that, which is exciting.”

In his two years leading NDP, Dr. Ronnie Floyd has made fostering greater ethnic diversity in prayer gatherings a priority.

Floyd was recently elected president of the Southern Baptist Convention Executive Committee. This governing body will play a critical role as the SBC denomination grapples with sexual abuse scandals.

His successor as president of NDP has not been formally announced.

The Purpose of Prayer

Presbyterian pastor Andrew Brunson closed the gathering with an earnest prayer. He expanded on his remarks in an interview.

“There is going to be increasing marginalization and silencing of Christians,” said Brunson.

“People who stand for truth, defining things the way God defines them, will face more difficulties.

“What I want to tell my children’s generation is: you need to prepare now. So that when it comes, you have already decided you are willing to pay the cost to stand for Jesus.”

Rev. Thompson hopes to spark new conversations with his book releasing next month, including on bridging racial divides.

“When we see each other as God’s children, what’s blinding us will go away,” he said. “We have to get to know each other not for our skin color, but for who we are. Pray to the Lord for unity, because nobody can do it but him.”

Student minister Eckart offered his take on why believers came together in prayer gatherings across the nation on Thursday.

“We are in the center of human power here in Washington, D.C.,” said Eckart. “Important decisions are made in the Capitol where we’re standing. But the real power is before the throne of God when we pray.”