JERUSALEM, Nov. 25, 2016 /PRNewswire/ — Friends of Zion Heritage Center (FOZHC) – with its campus located in the heart of Jerusalem and consisting of the internationally renowned Friends of Zion Museum visited by over 100,000 guests last year – hosted more than 80 distinguished guests representing more than 30 nations on Wednesday November 23rd, 2016 to mark the commencement of Phase II of its Ambassador Institute development initiative. The Ambassador Institute is focused on combatting anti-Semitism through partnership with the Christian community. 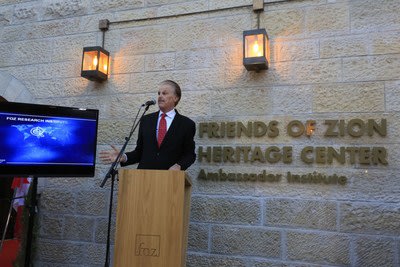 Distinguished guests included Ambassadors, Ministers, Members of the Diplomatic Core, Members of Parliament and other honored guests. The late President Shimon Peres served as International Chair of the Friends of Zion Heritage Center up until the time of his death in September of this year. Diplomats in attendance included representatives from Belgium, Brazil, India, Japan, and Russia. The event took place following the Jerusalem Post’s Diplomatic Summit where Friends of Zion president, Dr. Michael Evans, joined Prime Minister Benjamin Netanyahu as a keynote presenter.

H.E. Deborah Lyons, Ambassador of Canada to Israel, reflected, “Tolerance, understanding, dialogue and cooperation are part of our people, the same way our trees and mountains are.  We are honored to be a part of an event which promotes these shared core values.”

H.E. Martin Weiss, Ambassador of Austria to Israel, said, “Our people share a long history with the Jewish people, and it is more important now than ever that we stand with Israel and create friends around the world.”

The FOZHC is devoted to the celebration of Christian Zionists from around the world who have energetically worked to protect the Jewish people from persecution and whose efforts were instrumental in the creation and establishment of the State of Israel.

The Friends of Zion Museum is a one-of-a-kind multimedia experience that utilizes state-of-the-art technology, immersive video content, touch screens and 3D displays to commemorate the lives and efforts of 33 individuals including biblical heroes, businessmen, academics and military figures who helped forge the everlasting bond between the Jewish and Christian peoples.

Phase I of the development initiative spanned the last 24 months and included over $50 million in investment into the Heritage Center campus and museum.

Phase II will bring the total investment to more than $100 million and will unite the Friends of ZionResearch Institute’s communication center and the Ambassador Institute. Currently Friends of Zionboasts over 13 million fans on social media with over 550,000 joining each week, the majority of whom are millennials. The FOZHC is on track to reach its ambitious goal of accumulating 100 million fans in 5 years.

“We are tremendously honored to bring together such a distinguished list of diplomats, statesmen and other honored guests to celebrate the Friends of Zion movement,” says FOZHC President, Michael Evans. “The Friends of Zion Ambassador Institute is an ambitious plan to unite, mobilize and educate the millions upon millions of Christian Zionists from around the world. Phase II will enable us to continue training tens of thousands of Christian Zionists as ambassadors through their smart phones and on social media, while also leveraging adaptive learning to speak up and stand up for Israel in their own countries, college campuses and in political halls of power.”

FOZHC will have a real time social network communication hub providing rapid response to anti-Semitism online and it will be linked to the thousands of Christian TV and radio stations, print media, churches, and universities worldwide with pro-Israel content packages and video clips going out weekly. FOZHC will also collaborate with one of the world’s leading research companies to create Israel’s first Christian Zionist think tank.