[Release] Ahead of U.S. Visit, Yael Eckstein Tours Security Projects Funded by The Fellowship Throughout Israel

JERUSALEM — Throughout much of its existence, The International Fellowship of Christians and Jews (The Fellowship) has stood in the gap between the support people feel they need in the vulnerable parts of Israel and what the government has had the capacity and capability to provide.

“No government in the world protects its people as well as the Israeli government, but still, they cannot do everything,” said Yael Eckstein. “So, we have taken it upon ourselves to appeal to Christian friends around the world to do what the government hasn’t or can’t do in the far-reaching areas of Israel.”

Over the last fifteen years, The Fellowship has supported 13 hospitals, fortified countless buildings in communities vulnerable to rocket attacks, provided emergency equipment throughout Israel, installed thousands of bomb shelters, provided immediate aid to victims of terror and has supported “command centers” in bord 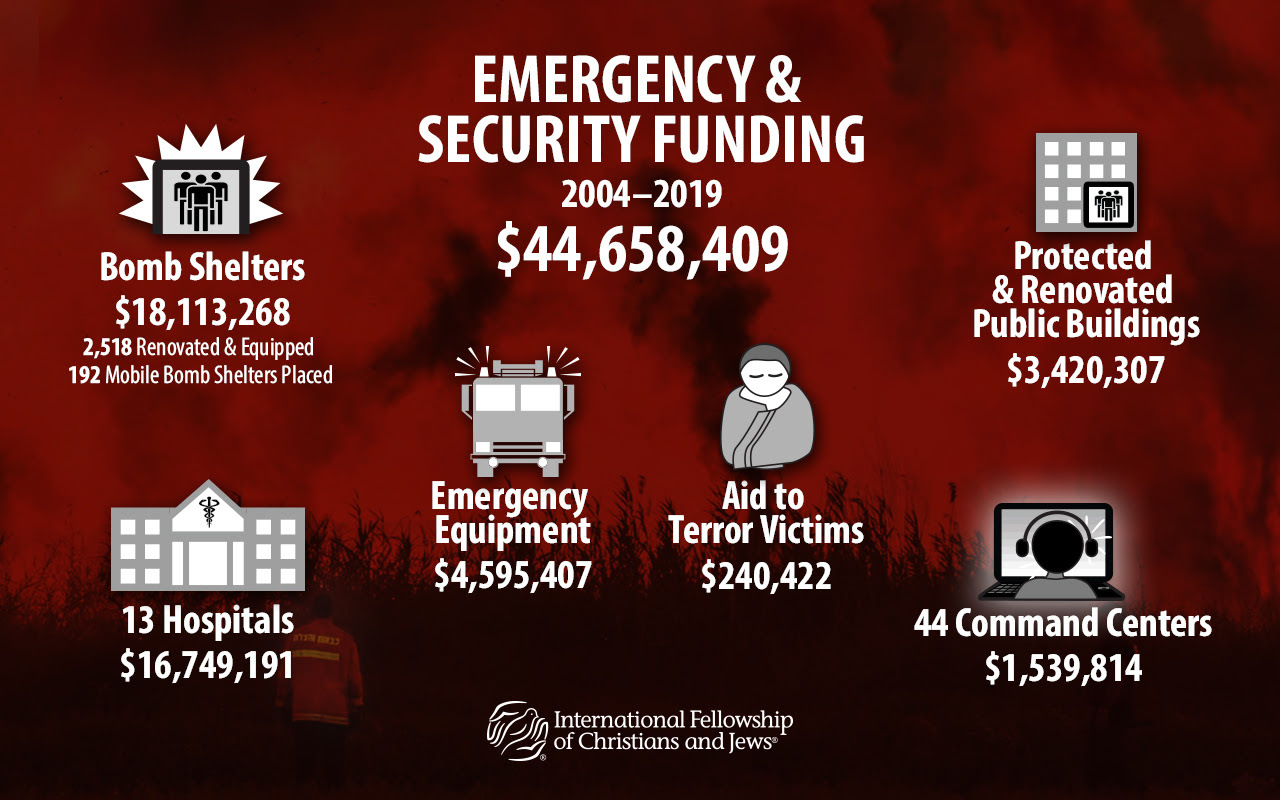 er communities to be used in the event of escalation of conflict between Israel and her neighbors.

In all, these projects account for over $44,600,000 given primarily by evangelical Christians to The Fellowship to help better secure Jewish communities throughout Israel.

Much of that support has gone to protect and strengthen the resiliency of Israel’s border communities, especially in areas adjacent to the Gaza Strip, like Sderot and Ashkelon.

“This is a special place,” said Eckstein. “So much of what we do in these communities is to improve the lives of people, and there’s no greater satisfaction than looking in the eyes of elderly members of the Jewish community whose family is gone or far away and to see joy.”

They also visited Rivka Peres, a 93 year-old holocaust survivor who immigrated from the Ukraine to Israel after first fleeing Russia when the Nazis entered the country. She now lives alone with no surviving family members, but is sustained by support from The Fellowship’s programs for Holocaust survivors. Her bedroom doubles as a bomb shelter when rockets fly.

Peres told her life story to Eckstein and Moore.

“I’ll never forget walking out of the home of this dear woman. She looked me in the eyes and she said, ‘Thank you for letting me tell my story,’” said Moore. “In that moment I realized that one of the greatest gifts The Fellowship gives is the gift of companionship.”

Eckstein and Moore also toured a command center partially funded by The Fellowship in the area of the Eshkol Regional Council which monitors communities that have been targeted in recent months by hundreds of rockets and incendiary balloons originating from Hamas and Islamic Jihad in the Gaza Strip. The fortified facility has been equipped with the latest technology to monitor security incidents in real time, and in the event of a war, it provides a secure operations center for the local authorities.

That command center is a short drive from one of several “terror tunnels” built underneath the barrier separating Eshkol Regional Council from the Gaza Strip. While the tunnel has been made inoperable by Israeli security forces, its entrance remains accessible on the Israel side for visiting international delegations to see for themselves the extraordinary efforts undertaken by Gazan extremists to infiltrate these farming communities.

Eckstein and Moore also visited the Israeli Defense Force base responsible for securing the region. They met with its commander, along with several soldiers. The next morning Eckstein paid a visit to two IDF soldiers who were still hospitalized after they were victims of a ramming attack by a car near the Palestinian city of Ramallah a few days earlier. Eckstein brought gratitude and prayers from the supporters of The Fellowship and a care package to bless the soldiers as they recover from their injuries. 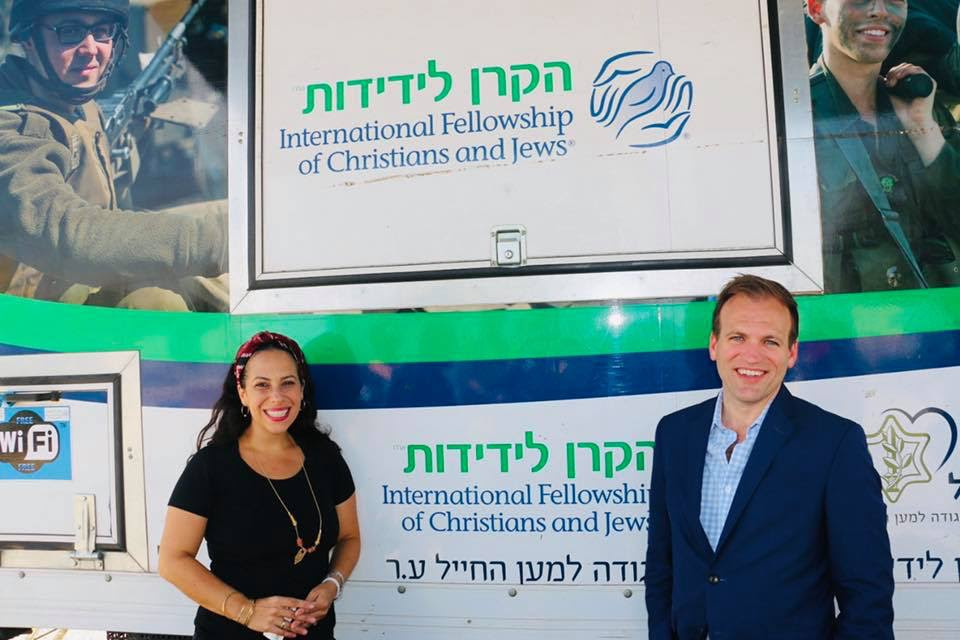 Eckstein’s site visit came during escalating tensions in the region.

In the same week, an 89 year-old Israeli woman died of injuries sustained when she fell running to a bomb shelter after rocket sirens began blaring throughout the community. Her death was inhumanely promoted by Islamic Jihad as a victory in their resistance against Israel. Also that same week, the former Interior Minister of Hamas Fathi Hammad called upon Palestinians throughout the world to “attack every Jew on the globe by way of slaughter and killing, if God permits.” And this week, regional press reports highlighted a visit by Hamas Deputy chief Saleh al-Arouri to Tehran to meet with Iranian officials, including a Sunday meeting with Iran’s Supreme Leader Ayatollah Ali Khamenei.

“I know it makes everyone uncomfortable, but during my visit to the southern tip of Israel, you couldn’t help but feel that another war between Hamas and Israel might be inevitable,” said Eckstein. “Because of the support of our donors to The Fellowship, these communities are safer now than they were the last time, but they still aren’t safe enough. We must do more.”

This week, Yael Eckstein begins a wide-ranging visit to donors and friends of The Fellowship throughout the United States in Illinois, Florida, Virginia, New York and Tennessee.

“Hopefully, next month, I’ll bring back to Israel good news—that more help is on the way,” said Eckstein.

During a July 1 committee meeting in Israel’s Knesset, The Fellowship was commended for the indispensable role it has played in providing emergency and security assistance to Israel’s border communities.

The International Fellowship of Christians and Jews (The Fellowship) was founded in 1983 to promote better understanding and cooperation between Christians and Jews and build broad support for Israel. Today it is one of the leading forces helping Israel and Jews in need worldwide — and is the largest channel of Christian support for Israel. Founded by Rabbi Yechiel Eckstein, The Fellowship now raises more than $120 million per year, mostly from Christians, to assist Israel and the Jewish people. Since its founding, The Fellowship has raised more than $1.6 billion for this work. The organization has offices in Jerusalem, Chicago, Toronto and Seoul. For more information, visit www.ifcj.org.

Yael Eckstein is the president of the International Fellowship of Christian and Jews. As President, Eckstein oversees all ministry programs and serves as the organization’s international spokesperson. She can be heard on The Fellowship’s daily radio program airing on 1,500 stations worldwide. Before her present duties, Yael served as global executive vice president, senior vice president, and director of program development and ministry outreach. Based in Jerusalem, Yael is a published writer, leading international advocate for persecuted religious minorities, and a respected social services professional. As President of The Fellowship, she also holds the rare distinction of being a woman leading one of America’s largest religious not-for-profit organizations.