Called by Billy Graham the “evangelist of the future,” Laurie has preached the gospel in person to millions of people throughout his life. His crusades in Southern California are the longest-running evangelistic outreach in American history. Special guests will also join Laurie at SoCal Harvest throughout the weekend. On opening night, Friday, Aug. 23, Brennley Brown of The Voice will sing “God Bless America” during a military appreciation ceremony that will include the unfurling of an American flag across the stadium’s field. Darryl Strawberry, author, former MLB All-Star right fielder and co-founder with his wife Tracy of Strawberry Ministries will join Laurie onstage Sunday evening.

The story of Harvest goes back to 1971, when Laurie, at the age of 17, walked away from a life of purposelessness and substance abuse and joined the Jesus Revolution that was sweeping across Southern California. A few years later, he began preaching and formed a small group Bible study. Nearly 46 years later, Laurie’s Bible study has developed into a church of more than 15,000 members across six different campuses in California and Hawaii, making it one of the most influential churches in the United States.

Laurie, a visionary with a heart for people, hosted his first Harvest Crusade in 1990, trailblazing a new approach to evangelism at the time. The 1990 crusade was “a casual evening of high energy music, authentic worship and a clear presentation of a biblical message.”

Since 1990, Harvest Crusades have been held in the United States, Canada, New Zealand and Australia. More than 8 million people have attended Laurie’s crusades in person or via broadcast online and on TV. 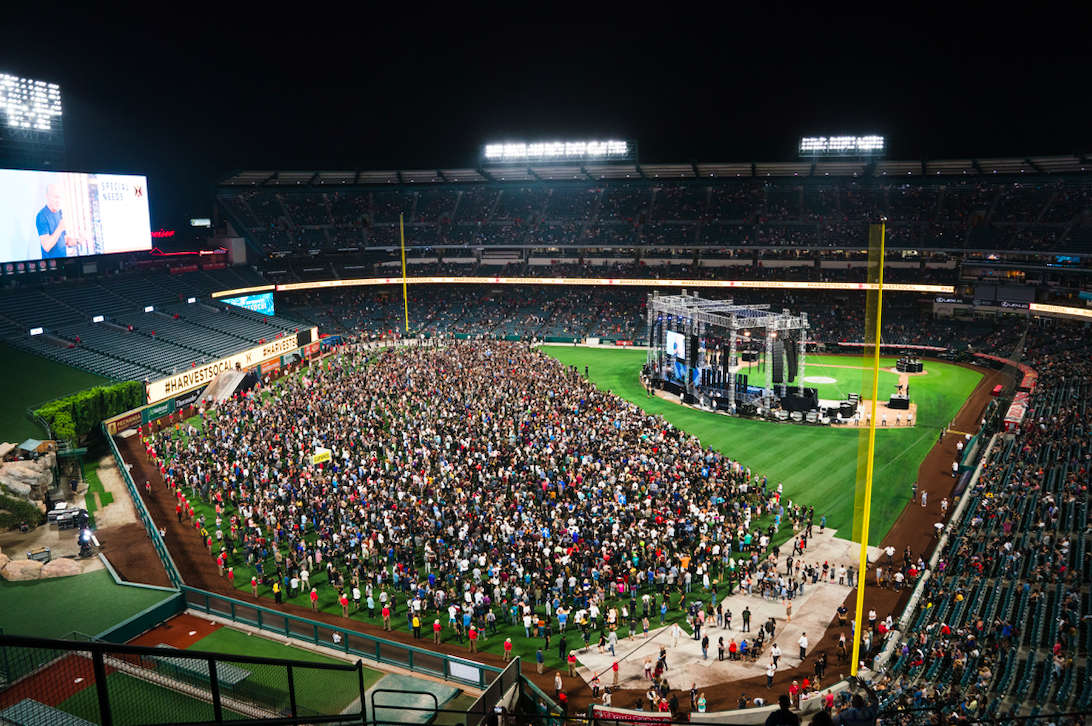 But while the Harvest movement has grown exponentially over the decades, its purpose has remained unchanged: reaching people with the gospel. An estimated 535,736 people have made professions of faith in Christ through Harvest Crusades since 1990.

“Looking back,” Laurie says, “I can see God’s hand at work from the very beginning. It has always been a part of God’s plan for us to know him and make him known.”

SoCal Harvest, like every crusade before it, is free to the public and is designed for all ages. No tickets are required for the event. Seating is on a first-come, first-served basis. There will be a $15 per car and a $30 per bus charge for parking at Angel Stadium.

Spanish and American Sign Language interpretation and special needs and wheelchair seating will be available.

Please email Press@theKcompany.co to request an interview with Greg Laurie.

Greg Laurie is an American author and evangelist who serves as the senior pastor of Harvest Christian Fellowship in Riverside, California, Harvest Church at Kumulani in Kapalua, Hawaii, and Harvest Orange County in Irvine, California. Laurie’s latest book, “Johnny Cash: The Redemption of an American Icon,” releases in August.