Samuel Rodriguez is the President of the National Hispanic Christian Leadership Conference (NHCLC), the world’s largest Hispanic Christian organization with 42,000 plus U.S. churches and many additional churches spread throughout the Spanish-speaking diaspora. 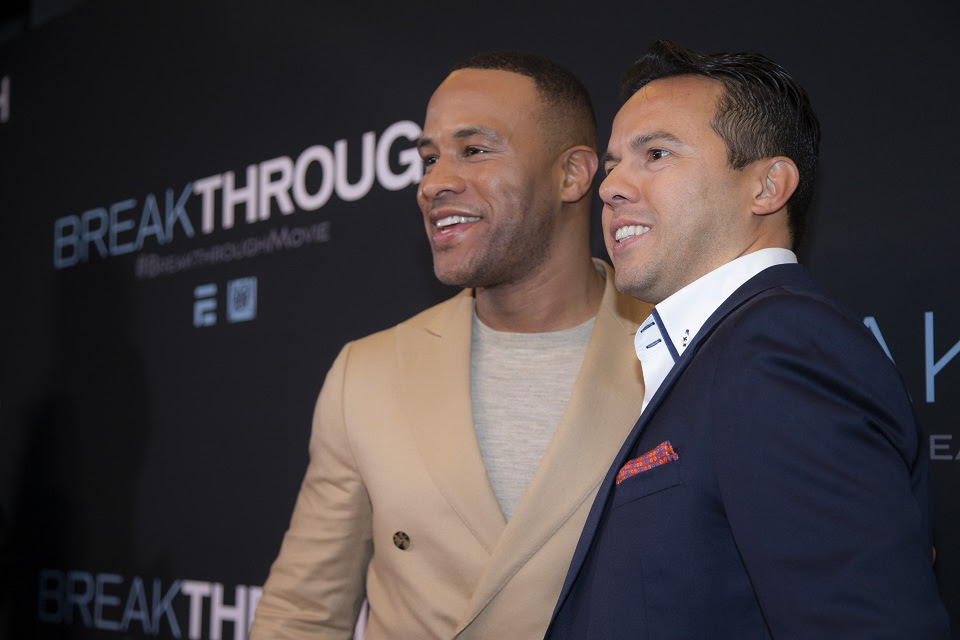 Producer DeVon Franklin, left, and Executive Producer Rev. Samuel Rodriguez at the red carpet for the premiere of Breakthrough. (Photo by Brandon Wade/Invision for BREAKTHROUGH/AP Images)

SACRAMENTO, Calif. — Breakthrough, the 20th Century Fox film about the true life story of the resurrection of John Smith, has won Inspirational Film of the Year at the 50th GMA Dove Awards. Executive produced by Rev. Samuel Rodriguez, the first Hispanic Evangelical leader to serve as executive producer of a major theatrical release, the film marks an inflection point in the world of entertainment for the Spanish-speaking faith community.

“I am eternally grateful to God for the honor and privilege of executive producing this amazing real-life testimony of God’s miracle-working power,” Rev. Rodriguez said.

Breakthrough is based on the incredible true and gripping story of 14-year-old John Smith, who after falling into an ice-covered lake was pronounced dead. The movie stars This Is Us actress Chrissy Metz as John’s mother Joyce Smith, who walked into her son’s hospital room praying loudly, calling out to God to save her son’s life. Immediately, John’s heart started beating. Defying every expert and all case history, John Smith miraculously walked out of the hospital on his own strength, only 16 days later.

Breakthrough debuted on Easter weekend this year and came in at No. 3 at the box office on its opening weekend. The movie, produced by filmmaker DeVon Franklin (Miracles from Heaven and Heaven is for Real) and directed by Roxann Dawson, has been 20th Century Fox’s only profitable film of the year so far, according to Variety.

More than serving as an executive producer, Rev. Rodriguez played a key role in introducing Franklin to John Smith’s family and Pastor Jason Noble, the real-life people who inspired the film.

“We are so honored and thrilled to have Reverend Samuel Rodriguez on board as executive producer for our movie,” said John’s mother Joyce Smith. “From the moment Reverend Samuel heard about our story, he has been the pivotal vessel God has used to propel our story of my son’s resurrection and total healing. We are so thankful for this divine connection.”

Rev. Rodriguez was also tapped recently to executive produce Flamin’ Hot, a movie that tells the rags to riches story of Richard Montañez, the Mexican immigrant who invented the hit snack Flamin’ Hot Cheetos. The movie is another partnership with Franklin’s studio and Fox Searchlight Pictures and is being directed by Eva Longoria (Devious Maids).

“These films are proof that Hispanic Evangelicals have a place at the table in Hollywood. We have incredible stories of faith to share with a world that is looking for hope and encouragement. It’s time we start speaking up,” Rev. Rodriguez said.